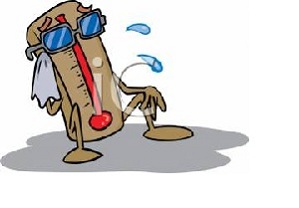 Well, this is embarrasing. I have been in the HVAC industry for over 40 years now and have helped design and manufacture some of the more sophisticated products that have been introduced. But, in spite of that I have to admit that I messed up. And the lesson that I was reminded of can help you too if your residential, commercial, or mission critical system is struggling to keep up with the heat.

Over the past couple of weeks the temperature here in Texas has been over 100 degrees F every day...sometimes up around 105 to 110. That is nothing unusual for Texas in the summer and not as bad as last year. But I started to notice that my residential HVAC unit was no longer able to maintain my thermostat setpoint of 77 to 79 degrees F. The system was consistently running 3 degrees behind and running non-stop...and was only installed a year ago.

No...it was one of the most common problems in any HVAC system that is not running correctly...the condenser coil was coated with a fine film of dirt. Let me repeat that...a FINE film of dirt. Not clogged...not even very obvious at a quick glance...a FINE film. In my case it was actually a fine film of dryer lint since the clothes dryer outlet was located behind the condensing unit...but the point is that had a service tech not looked at the coil with a flashlight I never would have noticed the dirt. Running water over the coil from a garden house to wash off the film dropped the system head pressure and restored the system's ability to maintain the thermostat setpoint without running non-stop.

Many years ago Louisiana State University conducted some tests on residential HVAC systems to determine the impact of dirty condensing coils. The results were eye-opening. A fine film of dirt, similar to what I had on my system, would reduce system capacity by up to 20%. If your home, business, or server room is too hot then imagine what giving it an extra 20% of capacity could do...and it would only cost you a bit of water and time to wash off the coils...with no service tech assistance required.