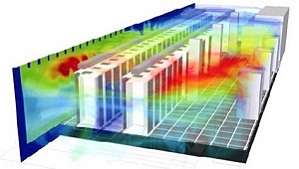 A February 22 article in the Data Center Knowledge emag published more information regarding the third revision of the ASHRAE “Thermal Guidelines for Data Processing Environments”. According to the Data Center Knowledge article the expanded ranges for operating temperatures and humidities may be a way for ASHRAE to catch up with the recommendations of the major players in the IT industry. Google, Intel, Microsoft, and HP are all quoted as praising the higher operating ranges.


In fact, Christian Belady, the General Manager of Data Center Research at Microsoft Global Foundation Services, was quoted as saying “Most companies in the cloud business are already procuring servers that operate well outside of the ASHRAE specs to allow for aggressive economization to drive much greater efficiencies then what is achievable using the ASHRAE specs...”

The new ASHRAE guidelines define four classes of operating environment with classes 3 and 4 recommended to use outside air only for cooling. Class 1 and 2 are defined as typical data center server environments, although Mr. Belady’s comments might suggest that the big data center players have moved past this already.